What Happens if You Get into an Accident without Insurance in NY?

In the state of New York, it is against the law to not have auto insurance while you are driving on the road. Whether you agree with this kind of law does not really matter at the end of the day because you will still be charged with a crime if you are pulled over and you cannot show proof of insurance. If you are unlucky enough to get into a car accident while you are not insured, then you could be facing a variety of different issues on top of having to pay for the damages to the other person’s car and body. Let’s take a look at the details at what would really happen if you got into an accident without auto insurance in New York. 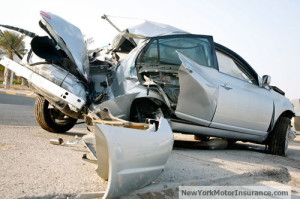 Find out what will happen if you get into an accident without insurance in New York State.

New York is considered a “no-fault” state, which means everyone’s own insurance pays for the damages in an accident no matter who is at fault. This puts you in a pretty rough spot if you are actually driving down the road without insurance. In a situation where someone slams into you and it is actually their fault, they would actually turn out better than you at the end of the day. Since New York is a “no-fault” state, their insurance would cover their own damages, while you would be left out in the cold. In this kind of situation, you could probably make a moral argument for the person at fault to pay for your car’s damages. Having said that, the law is more important than morality in the real world. It’s important to remember that you also need to worry about other people’s ability to drive when you are going down the road without insurance in New York.

What Happens to You?

Whether an accident was your fault or not, you can reasonably expect to lose your license for up to a year if you are caught in an accident without insurance. Driving without insurance is illegal in most states, and New York is one of the states that fall under that illegal umbrella. You could be facing jail time and fines depending on who was at fault in the accident and how serious the damages turn out to be. You are issued a sticker to put on your car when you get auto insurance in New York, so it is pretty easy to spot an uninsured driver without much extra work. You are actually supposed to surrender your license plates and registration if you allow your auto insurance coverage to expire.

It’s Not Worth the Risk

You can hope and pray that you will never get into a serious auto accident while you are in New York, but the reality is that even the safest drivers sometimes find themselves in serious accidents. If you get into an accident and your car is completely totaled, then you will be left without a car and no money to pay for a new one. Remember, this will happen even if you are not the driver who is at fault for the accident. Since everyone’s insurance is supposed to pay for their own damages, you will be left with no legal authority in having someone else pay for your new car if someone else slams into you. At the end of the day, it would be incredibly idiotic to skip out on getting insurance in New York. If you cannot afford insurance right now, then you shouldn’t be driving your car. The risks involved with driving uninsured in the state of New York are simply not worth it.