A Look Into The Cost Of Taxis In NYC

New York City has taxis all over the place. Everywhere you look, there is a yellow cab zooming down the road. The amount of taxi cabs in the city make sense, however, as it is the prime method of transportation for millions of New Yorkers. In fact, there are over 13,000 licensed taxis in the city, with most of them crunched into the tiny, yet bustling borough of Manhattan. 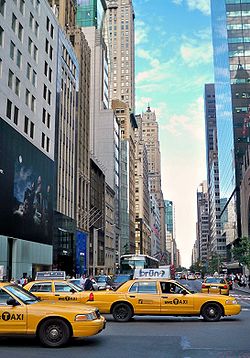 While many New Yorkers complain about the rising costs associated with taxis, many do not really understand the economics behind the cars. Sure, a 15 minute ride from Times Square to Chinatown might cost you $20, which is quite expensive compared to cab fares elsewhere in the world, but is it worth it? What are you actually paying for?

The taxi rates in New York City are always changing (always going up, I should say). Currently, it costs $2.50 just to get inside a cab, and then the rate increases $0.50 incrementally as the car drives along. (To view how the current taxi rates are calculated, click here to view the NYC Taxi Commission’s website.)

But what makes these prices what they are? Why aren’t they cheaper? Or why aren’t they more expensive? To understand these questions, you need to know what taxi drivers make and how much taxi licenses cost.

Many drivers even take home more than the 30k salary however, but they have to work extra hard to get it. According to Reuters, the maximum amount a cab leased out to drivers can earn over a year is $82,524. This assumes that the cab had a driver every day and every night and that it never breaks down.

But ask anybody who lives in New York, and they’ll tell you quickly that a $30,000/year salary is far from enough to live in the city. If you take into consideration that the standard of living in Manhattan is more than twice the national average, and that earning $60,000 in Manhattan is the equivalent to someone making $26,092 elsewhere in the country, you can see why taxi drivers and their meager $30,000/year salaries often times live in the outer boroughs and commute into Manhattan for work everyday.

Taxi drivers in NYC, unlike in other cities, usually aren’t self-employed individuals. They are usually hired by owners of the taxi license to work under them. Once you learn about the costs of these highly demanded taxi licenses in the next section, you’ll know why.

How Much Does It Cost To Get A Taxi License

In New York City, all taxis need something called a “medallion” in order to operate in the city. A medallion is basically just a taxi license, that gives you the right to drive a cab in the city. Like stated above, there are only 13,000 licensed taxis in the city. The problem with this is that the city has a fixed amount of medallions that they allow, and it has been set at 13,000 for years. Therefore, the demand for these medallions is quite high.

In the 90s, a corporate taxi medallion cost around $200,000. Nowadays, the taxi licenses cost close to one million dollars. According to Bloomberg, 2 taxi licenses just sold for a record price of $1 million each. As you can see the demand for these licenses is increasing, and with that, so are the prices.

But just how much can you earn as a medallion owner? Investors are actually flocking to these medallions because they view them as good investments. After paying for maintenance, insurance, and workers compensation, etc., medallion owners could earn up to $50,000 per year on their investment. That’s better performance than both gold and oil!

There’s even a New York based corporation, which is publicly traded, that invests in these taxi medallions. Known as the “Medallion Financial Corp. (TAXI)”, the firm owns around 300 medallions, is constantly buying more, and is always looking for new investors. They claim around a 3% per year return, which is better than many other investments including gold, oil, treasury bonds, etc.

As you can see, the NYC taxi system is a serious business.  It’s a billion dollar trade that only keeps increasing in value every year.  The drivers, the license owners, the government, repair shops, insurance companies, etc. all take a piece of the pie.  So, the next time you hail down a yellow car and get into that taxi, you’ll now know where your fare will go.