What Are the Penalties for Driving Without a License in New York?

The process of getting a driver’s license can be time-consuming, and it can be very tempting to drive without one if the opportunity presents itself. However, the penalties for driving without a valid license in New York are harsh and are not worth the risk. Here are the laws and penalties for driving without a license in New York, and what you need to know before you get behind the wheel.

Basic Penalties for Driving Without A License 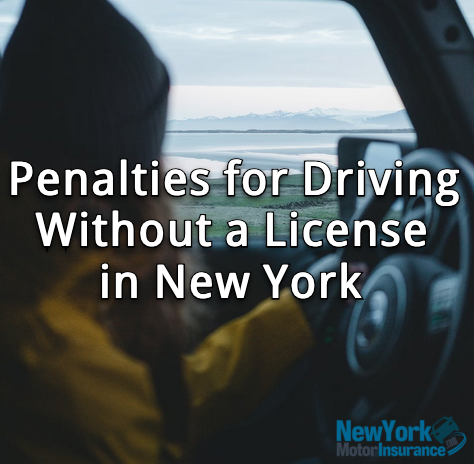 The penalties for driving without a license vary depending on the severity of the incident. If you are pulled over and don’t have your license with you, but you do have a valid license at home, you can get the charges dropped. You will just need to produce the license in court to have your penalties removed. The general rule for violating New York’s driver’s license requirement is a monetary fine and up to 15 days in jail. The monetary fine is usually between $75 and $300.

How can I get a driver’s license in New York for the first time?

If you’re getting a driver’s license in New York for the first time, you’ll first need to apply for a learner’s permit. This requires you to pass a written test and an eye exam, and you’ll need to bring a social security card and six points of identification. While you have your permit, you’ll need to complete 50 hours of supervised driving, including 15 hours of night driving, and take a five-hour driving course. You can then take a road test to get a junior driver’s license. This allows you to drive unsupervised, but you have to follow certain restrictions, depending on the area where you live. For example, you cannot drive in the city of New York, you cannot drive with more than one unrelated passenger, and you cannot drive at night in certain areas. You can get a full driver’s license at age 17 if you’ve taken a driver’s education course. You will automatically be issued a full driver’s license at 18 if you have a junior driver’s license and have not violated any of the legal regulations.

Do I need to get a new license when I move to New York from another state?

New York state recognizes driver’s licenses from other states and countries for those who are visiting. Foreigners can also get an international driving permit, which allows them to drive in the States and many other countries legally. However, residents who have just moved to New York will need to get a New York state license, even if they have a valid license from another state. You will have 30 days to apply for a new license from the time you move to New York. Once your New York State license expires, you have 60 days to renew it. If you’re caught driving on an out-of-state or expired license, you could be charged a $40 fine. However, you won’t incur the more serious penalties that come from driving without a license altogether.

What are the laws for driving with a permit in New York?

If you’re getting a driver’s license for the first time, you’ll need to get a driver’s permit while you are learning. A driver’s permit allows you to practice driving with someone who is experienced. You must be at least 16 years of age to get a permit in New York State, and you’ll need to have your permit for at least six months before you can take the driving test. There are some states where you can get a permit at the age of 15. Even if you have a permit from one of these states, you cannot drive in New York until you are 16.

If you have a permit, you will need to have an adult in the front passenger seat with you at all times. They must be over the age of 21 and have a valid driver’s license. Their driver’s license can be from another state, but it cannot be expired. You are never legally allowed to get behind the wheel alone if you have a driver’s permit. You also cannot drive on certain parkways in New York City and Westchester County, even if you are supervised by a licensed driver.

What are my alternatives to driving?

If your license has been suspended, it can be very tempting to get behind the wheel. After all, it’s hard to beat the convenience of having your own vehicle. However, the penalties that come from driving with a suspended license are so harsh that it isn’t worth the risk. Here are some alternative modes of transportation to consider if you don’t currently have a license.

Driving without a license in New York comes with harsh penalties, so you shouldn’t take the risk. Consider other modes of transportation, or take steps to get a valid license before stepping behind the wheel. Although it may not seem like a big deal at the time, you won’t want to deal with jail time or hefty fines down the road.