Why Is Car Insurance Mandatory?

Car insurance is mandatory because vehicles can cause a lot of damage. The at-fault driver is required to cover this damage. If you injure someone or damage someone’s property with your vehicle, then you need to cover that damage. We can’t trust everyone to pay, which is why we need car insurance.

Car Insurance is Mandatory Because of Liability 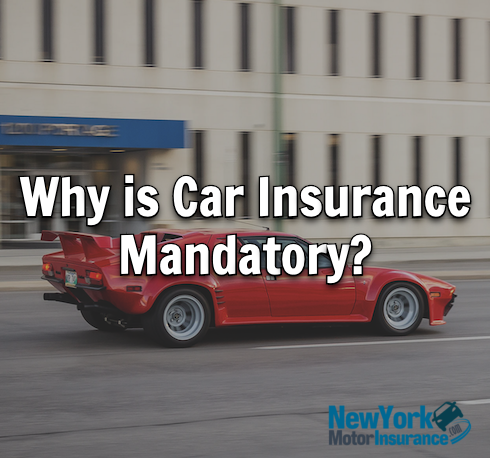 100 years ago when cars were becoming popular, society realized a big problem: cars could cause a lot of damage.

Cars could damage property. They could cause deaths and serious injuries. They led to lost wages, hospital bills, automobile repair costs, and other expenses.

While some drivers were able to cover this damage, other drivers were not. A rich driver might afford to cover someone else’s injuries after an accident, while a poor driver would not be able to pay anything, leaving society to cover the costs.

Society is built on the idea of liability. When you cause damage to someone, you are liable for that damage. You caused that damage, so you need to pay for it.

With cars, people were still liable for any damage they caused – but the costs of a vehicle accident could be too high for some people to cover on their own. They would just declare bankruptcy instead of covering the full costs of the accident.

In many cases, the cost of the accident was so high that the driver could not afford to cover the damage. The driver might not have enough money cover the medical bills and vehicle repair costs after an accident. However, these costs still need to be paid, and society ultimately absorbs the cost.

As vehicles became more popular, states realized they needed some type of insurance system to offset these costs.

Today, all states require drivers to have some type of proof of financial responsibility – like car insurance – to legally drive.

Car Insurance is Not Required in All States

Every state in America requires drivers to pay for any damage they cause after an at-fault accident.

However, that doesn’t necessarily mean you need to have car insurance. Some states require drivers to provide proof of financial responsibility in other forms – like through surety bonds or DMV deposits.

Two states do not technically require car insurance whatsoever, including New Hampshire and Virginia. However, Virginia still requires drivers to prove financial responsibility to legally drive – say, by depositing money with the DMV or an equivalent agency. New Hampshire does not require proof of financial responsibility, although drivers are still liable for any damage they cause.

Similarly, drivers in California can buy a surety bond instead of car insurance. You can buy a $35,000 bond with the DMV or another agency, for example. This money is locked away in the event of an accident. It’s not technically car insurance – but it proves you can cover the liability of your accident.

Mandatory Car Insurance Limits: How Much Do I Need?

Each state sets its own limit for minimum liability coverage.

Drivers can choose to meet or exceed each state’s minimum limit. You might decide you want added peace of mind, for example, and buy added car insurance coverage.

Alternatively, drivers who want to save as much money as possible and are okay with added risk may match the minimum liability limits. You’re paying the lowest possible amount for car insurance and have minimum coverage, but you’re legally able to drive.

What Would Happen If We Didn’t Have Car Insurance?

Car insurance is mandatory because the alternative is much worse.

If we did not require drivers to have car insurance, then we would have the same number of accidents – but the consequences would be worse.

Without car insurance requirements, drivers would still need to cover damage in the event of an accident, but many drivers would be unable to pay.

This is an extreme example, but it explains why we have car insurance.

Even with car insurance requirements, many states have high numbers of uninsured drivers. In some states, nearly 25% of drivers do not have insurance.

Driving is a privilege – not a right. To drive in the United States, you need to prove you are financially responsible for any damage you cause to other people or property.

Most drivers buy car insurance as proof of financial responsibility.

In some states, drivers are not technically required to buy car insurance, although they still need to prove financial responsibility in other ways.

Drivers in New Hampshire can avoid car insurance altogether, for example, although they’re still liable for any damage they cause. Drivers in California, meanwhile, can buy a $35,000 surety bond with the DMV instead of car insurance.

Without car insurance, these costs would be passed onto society. With car insurance, we can create a safer driving situation for everyone on the road.