How Much Does Auto Insurance Cost for a 16-Year-Old in New York State? 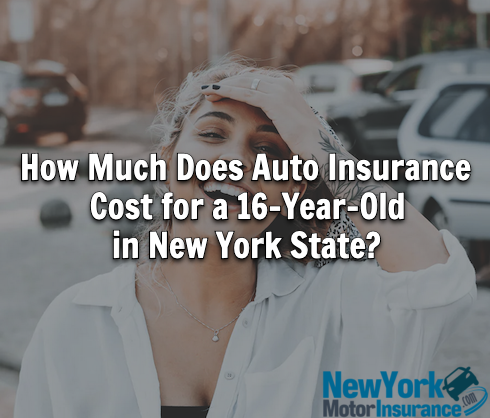 On average, the cost of insuring a 16-year-old in the USA is about $7,000 for full coverage on their own policy. In the state of New York, this cost is $5,089 for a female and $6,522 for a male. This coverage is their own policy that entails comprehensive and collision coverage with liability limits of 100/300/100.

Expect the car insurance bill to rise by 118% when adding a teenage driver who is 16.

Why is Vehicle Insurance for a 16-Year-Old More Expensive?

There are many errors that young drivers make. As mentioned earlier, teenage drivers may drive while intoxicated. Their attention is quickly taken by cell phones, people, the radio, and many other distractions.

Another habitual error for young drivers is tunnel vision. When a driver has tunnel vision, they focus on the road in front of them but not on the things around them like cars pulling out into the street or road signs. These drivers take time to develop their scanning ability. This ability will help them become a defensive driver.

Finally, speeding is often a chronic error that causes many accidents. Fast cars and slow reflexes are not a good mix. Whether intentional or not, speeding is a lead cause of accidents among 16-year-old drivers.

Another reason vehicle insurance is more expensive for a 16-year-old is fewer discounts available to them. Typical discounts added to policies include multiple drivers, multiple vehicles, accident forgiveness, and safe driver discounts. When a 16-year-old begins a new policy, they won’t be eligible for these discounts

How to Save on Car Insurance for 16-year-olds

There are three ways to save money on car insurance for a 16-year-old in New York. First, they can be added to a parent’s policy. Second, they can share a car, and finally, they can qualify for discounts offered through the insurance company.

Instead of 16-year-olds having their own insurance policy, it is less expensive to add them to an existing policy. Many parents find it is easier and cheaper to add their teenage drivers to an already existing policy for several reasons.

Insurance companies determine rates based on experience and driving records. A 16-year-old won’t have either of these, but parents will making it cheaper to add a teenage driver instead of getting their own policy.

As you can see, it is far cheaper to add your 16-year-old to your policy than it is for them to have their own.

Many teenagers look forward to having their own car when they turn 16; however, it would be cheaper to share with their parents or with another sibling. Fewer cars to insure means a less expensive policy. The 16-year-old can be added as a second driver on a vehicle instead of the primary driver, lowering insurance rates.

When looking to save money on car insurance for a 16-year-old, look for available discounts. Many insurance companies offer discounts that include multi-vehicle, loyalty, and multi-policy. Some companies even provide other discounts for young drivers, including driver education discount, good student, and a parent-teen driving contract discount.

Driver’s education is required in the state of New York for new drivers. This course must be at least five hours. Some insurance companies will give you a percentage discount if you complete this course.

A good student discount is given by several insurance companies when a student sustains a “B” average in school. This discount could be as high as 15% and is suitable for students through college.

Parents and teens can create a contract that lists the rules the teen must follow to drive independently. These rules may consist of a number of hours allowed to drive, number of miles, and passengers. Once both parents and teens sign the contract, it can be shared with the insurance company for a discount. Be sure to ask the insurance company what they would like included in the contract.

Final Word on Auto Insurance for 16-Year-Olds in NY

Insuring a 16-year-old for car insurance will increase your insurance bill; however, there are ways to save money. The best way to do this is merely adding your child as a secondary driver on an already existing policy instead of creating a new one. Expect your insurance bill to increase by 110% when adding this new driver. It is an exciting and stressful time adding a new driver. Let us help you today! Get a free insurance quote by scrolling to the top of the page and entering your zip code.