Is There a Low-Mileage Discount for Infrequent Drivers?

If you don’t drive often, then paying for car insurance can feel like a big hassle. Since global climate change is such a hot topic right now, many people are moving away from their cars and using other transit options to preserve the planet. And in New York, public transit is just part of the culture – many people only use their cars to drive to rural areas. With so many people driving their cars less, insurance companies are offering discounts for those who don’t drive often. Here’s what you need to know about these money-saving offers. 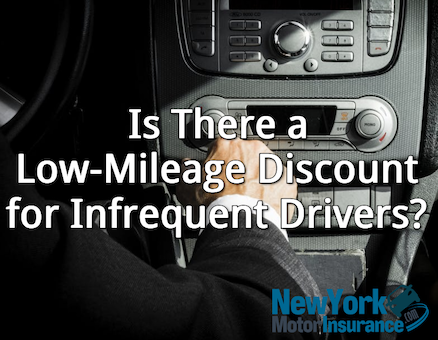 Most car insurance companies offer at least some form of a discount for those who don’t drive often. Typically, a low mileage driver is considered to be someone who drives less than 7,500 miles per year. When you open a car insurance policy, they will typically quote you the rate for someone who drives 12,000 miles per year, which is the national average. However, you should mention to your car insurance agent that you are an infrequent driver, and they can adjust your premiums. You will probably end up saving at least $100 per year.

Another option for low mileage drivers is a mileage-based insurance plan. These plans are becoming increasingly popular, particularly among those living in big cities who don’t drive often. With a mileage-based insurance plan, you will get a device to put in your car that tracks the number of miles you drive. Then, that number of miles is factored into your overall car insurance premium to save you money. The less you drive, the less you’ll end up paying. Many major insurers offer these types of policies. Allstate Drivewise, Progressive Snapshot, and Esurance DriveSense are all popular options. Many insurance companies are now offering this option after seeing how popular it has become among young drivers.

If you want to save money on your car insurance, reducing your automobile usage is one of the best ways to do so. If you usually use your car every day, breaking this habit can be challenging. Here are some tips to help you reduce your reliance on your vehicle.

Not only is reducing your driving good for the planet, but it’s great for your wallet as well. If you don’t drive often, it’s worth looking into low mileage discounts for your car insurance.