Can My Insurance Company Raise My Premium Due To An Accident?

If you are unfortunate enough to experience a car accident in New York, you not only have the pleasure of paying some of the highest insurance premiums already, but you could also face a hefty rate hike following your accident. In a 2017 study by the Consumer Federation of America, premium quotes in ten cities from five of the nation’s top insurance companies were collected. Although many drivers who cause accidents expect their rates to increase, the study also found drivers in New York City, as well as Baltimore, pay the most for a not-at-fault accident. New York, being a “no-fault” state where your insurance pays for your costs regardless of whose fault it is, leads the pack when it comes to increasing premiums if you are hit by another driver through no fault of your own. 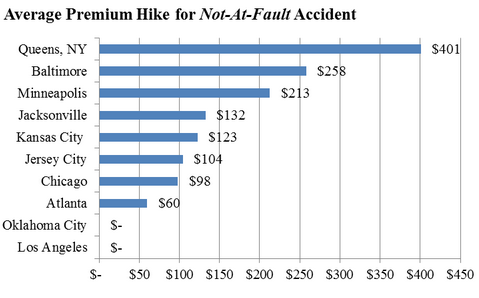 The study points out that in two of the cities Los Angeles and Oklahoma City, there was no increase because in those states there are laws that prohibit additional surcharges on drivers who are involved in accidents that were not their fault.

The report also found differences in the way insurers applied the surcharges. For example, the report found that Progressive applied a surcharge to every post-accident quote except in cities where their use is not allowed by state laws. GEICO and Farmers sometimes raised quoted rates by 10 percent or more. Allstate inconsistently penalized some drivers and not others. State Farm was the only insurer in the study that didn’t increase premiums for drivers involved in “not at fault” accidents. 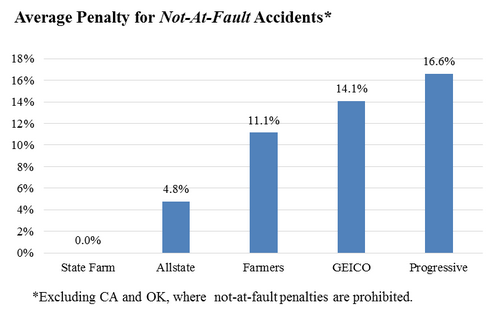 A New York Times Article by Ann Carrns quotes J. Robert Hunter, the Consumer Federations Director of Insurance, as stated in a phone conference, “Innocent drivers who don’t cause accidents should not be charged more because someone else hit them.”

The same article quotes Loretta Worters, a spokeswoman for the Insurance Information Institute as advising caution because “online rate quotes are merely a starting point.” Insurers, she said, ultimately base auto policy rates on much more information than initially gathered through a quote requested via an insurer’s website. Worters goes on to suggest why some insurers may add a surcharge for accidents that the insured driver didn’t cause. She outlined that, your insurer may incur costs, even if the driver is not at fault through the process of subrogation or seeking payment from the other driver’s insurance provider. “Assigning fault in an accident is rarely a zero-sum process where one driver is 100 percent at fault whereas the other driver is zero percent at fault,” she said. The facts may indicate some shared responsibility.

The Consumer Federation of America has also found a pattern in their studies that indicate that lower and moderate-income drivers not only pay more for insurance in general but also face higher surcharges after accidents in which they were not at fault. The study found the following (after excluding State Farm drivers, who are not penalized):

Industry academics have been aware of patterns like these for some time. The U.S. Department Of The Treasury formed the Federal Insurance Office (FIO) which has released its first study on the Affordability of Personal Automobile Insurance. This study attempts to drill down on a method of calculating an affordability index to aid in the comparison of automobile insurance affordability on a state zip code basis. A daunting task, but the study is a solid first effort. FIO, born out of Congress’s recognition that minorities and Low-Moderate Income (LMI) persons could be at a higher risk from financial downturns than other groups within the population. Tasked with ensuring federal monitoring of consumers’ access to affordable insurance products in light of the awareness that affordable access is critical to their quality of life and economic growth.

The Federal Insurance Office has focused on personal auto insurance because affordable auto insurance can promote financial security for individuals and families. Auto ownership has always been associated with a greater opportunity for economic well-being, including better access to employment opportunities in a greater geographic range. FIO has also reached out for more data from all the major insurance providers and will continue to expand on its current affordability index method.

The affordability index is basically a ratio of average premium insurance expenditures to the median household income by zip code. This gives a general affordability comparison nationwide. It would not surprise any New Yorker that the state has the highest number of zip codes with an affordability index above 2%, at 115 in total.

The future may hold some relief for New York drivers so long as FIO continues to be a lighthouse with its great work. In the short term, however, it is imperative that New Yorkers exercise their power of choice and shop around for an insurer that won’t apply a large surcharge if you have been in an accident that was not your fault.  It is still possible to keep your costs down and maintain or improve your quality of life. You’ve got this!