How Much Is Car Insurance in NYC for a First-Time Driver?

Car insurance companies charge some of their highest rates for new drivers, and for good reason – statistically, a new driver is much more likely to get into an accident than an experienced driver. If you’re a brand new driver in New York City, you’ll have even higher rates to contend with. New York City has some of the highest car insurance premiums in the nation due to the area’s high volumes of traffic. 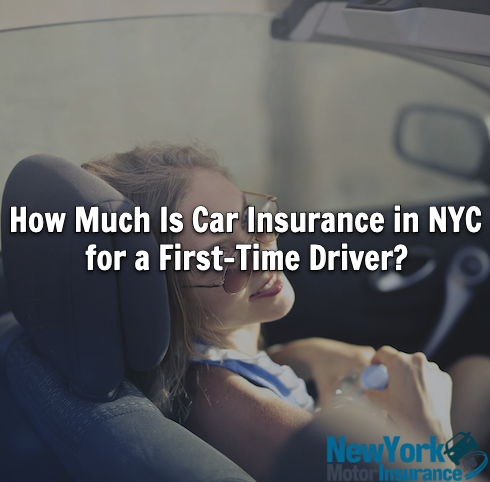 Before getting your license, it pays to budget and shop around for car insurance. Every company has its own method for calculating car insurance premiums, so you can get a better deal by considering all of your options. In this article, we’ll discuss the average price of car insurance in New York City for new drivers, as well as ways that you can save money.

What Is the Average Cost of Car Insurance in NYC for a First-Time Driver?

On average, car insurance for a brand new driver ranges from $4,200 to $5,500 per year. Premiums are the highest right after a driver gets their license, and go down as the driver gets older. Car insurance premiums can vary widely from company to company, so you’ll want to get quotes from several different insurers.

Why Are Costs Higher for New Drivers?

Additionally, New York has a relatively high cost of car insurance when compared to other states. There are a number of different reasons for this. One is that New York is a no-fault state. This means that car insurance companies are responsible for paying for injuries that result from car crashes, regardless of who is at fault. This increases the financial liability of car insurance companies. New York City also has a very high cost of living, and this includes the cost of auto repairs and medical bills. Car insurance companies increase their rates to absorb these high costs. Finally, New York City has very high volumes of traffic, which leads to an increased number of accidents. The city also has a very high percentage of people driving without insurance, which also increases premiums for those who do carry insurance.

How Can I Get My License in NYC?

New York City has different rules for getting a driver’s license than most other states. Prospective drivers have to be 16 to get their first learner’s permit. To get your learner’s permit, you’ll need to take a written test at the DMV. Once you have your learner’s permit, you’ll be able to practice driving with a licensed adult over the age of 21. There are some areas where you will not be able to drive with a learner’s permit. These include any streets within parks in New York City, any bridges or tunnels operated by the Triborough Bridge and Tunnel Authority, or certain parkways in Westchester County. You also may not practice in a DMV road test area.

If you are under the age of 18, you must hold your learner’s permit for at least six months before you can schedule a road test to get your license. Then, you can apply to get a junior driver’s license. To do this, you will need to complete a driver’s education course as well as at least 50 hours of practice driving with a supervising adult. There are certain restrictions you’ll have to follow with a junior driver’s license. For example, you will not be able to drive alone in the city of New York, and you cannot drive with more than one passenger in the car who is unrelated to you. In some areas of the state, you cannot drive between the hours of 9 PM and 5 AM without adult supervision.

What Discounts Are Available for New Drivers?

Although car insurance for new drivers can be expensive, there are things you can do to lessen the financial blow. Many car insurance companies offer discounts to help you save money, some of which apply to new drivers. Before signing up for any new car insurance policy, you should always ask your insurance agent if there are any discounts available that apply to you. Many people are surprised by how much money they can save just with these discounts.

One of the most common discounts for new drivers is a good student discount. The details vary between insurance companies, but generally if you are a high school or college student and maintain a ‘B’ average or above, you can qualify for this discount. Many companies also offer discounts for young drivers who have taken a defensive driving course. Additionally, families can take advantage of discounts for having a student away at college, having multiple cars on the same policy, or having a teen start with the same insurance company that the family has already been using. Teens can even get their own good driver’s discounts by maintaining a clean record for the first few years after getting their license.